I chose that title, if for no other reason than, ‘It sounds badass’.

Right now this post doesn’t mean crap, but someday, I’ll go back to this place and moment, and bop myself in the head for ever feeling like I can’t write another word to my novel. 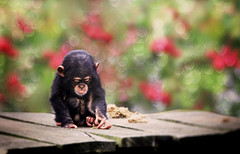 Even that monkey commiserates (BIG WORD).

When I was younger, I used to believe that the reason why I couldn’t write was because my Muse left me, or something as equally asinine as that. But then I grew up, and I committed myself to this book called Champions. And then I realized that writing has very little to do with Muses and inspiration, and lots to do with discipline and commitment.

Carlos Luiz Zafon, author of Angel’s Game and Shadow in the Wind once said, “Inspiration comes when you stick your elbows on the table, your bottom on the chair, and you start sweating. Choose a theme, an idea, and squeeze your brain until it hurts. That’s inspiration.”

None of those fleeting faeries and flights of fancy.

You just sit down and write.

Tell me your story and I’ll teach you how to write it. Let’s talk!